SSgt Paul Starner wrote:When you’re going through these houses, it’s dark—there’s no electricity. And they know you’re coming. They’re hiding in the dark, waiting on you.

Traditionally, most game engines “pre-bake” their lighting. While this approach can yield strong visual quality, it comes at the cost of a static game world—sunlight, shadows, lamps, and most other lights are all fixed from start to finish. Of course, in the real world, light and shadow can change constantly—and this often has a huge impact on combat.

Marines, Soldiers, and civilians didn’t have the luxury of memorization and trial and error when navigating Fallujah. In Six Days in Fallujah, players don’t either. And so, we sought a solution that would compete with baked lighting in visual fidelity but also offer the flexibility needed to match our gameplay goals. We arrived at Global Dynamic Lighting. 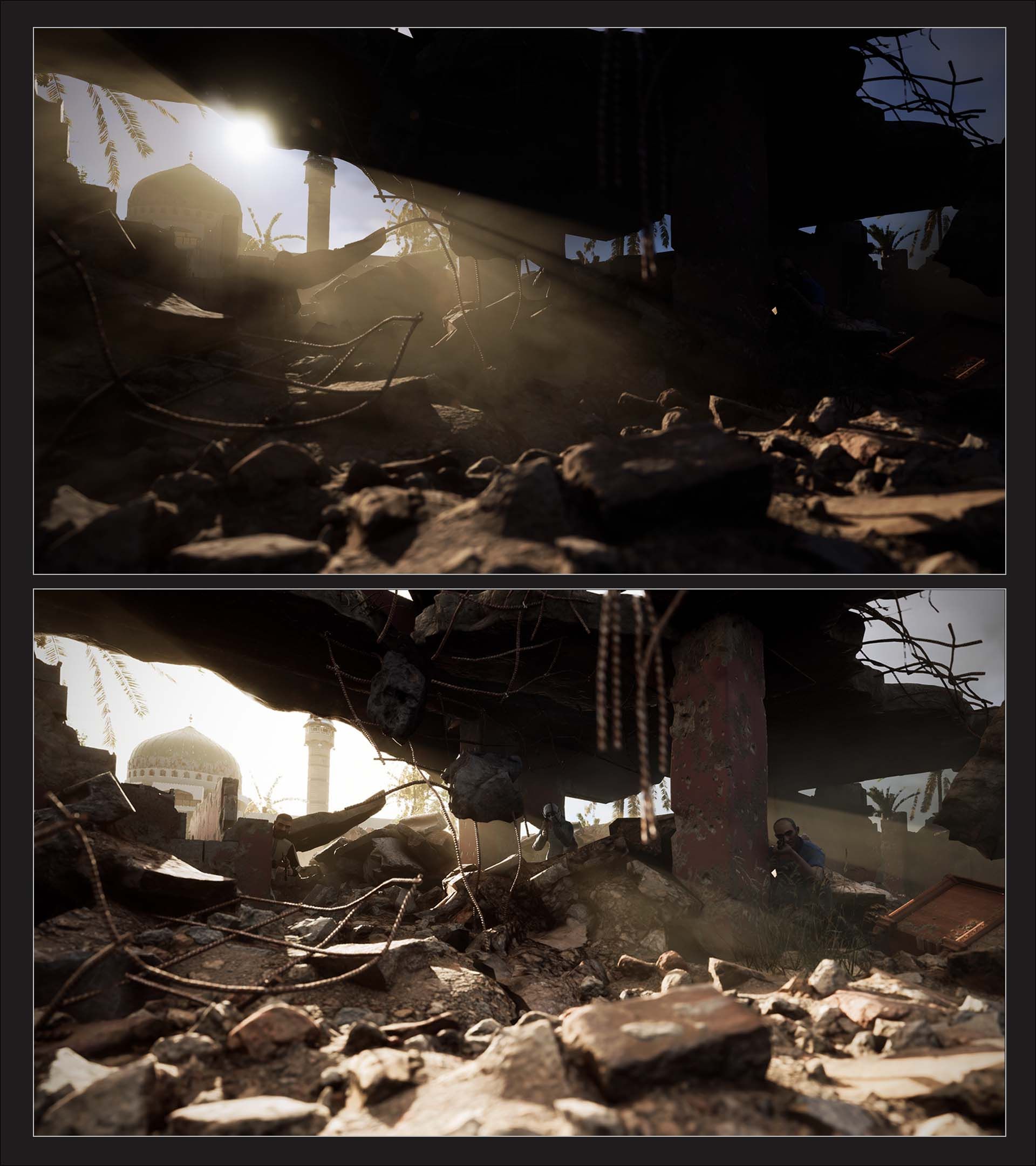 Even something as simple as clouds moving across the sky can change player visibility. As the clouds reposition across the sky, the intensity and distribution of light also changes across the game world. Ultimately, this affects how the player’s eyes adapt to this light.

Take the two screenshots above as an example. In the first, intense sunlight creates very specific and targeted areas of visibility. However, the increasing cloudiness in the second screen distributes light more evenly, exposing insurgents who would otherwise be hidden. In other conditions, clouds might hide these threats.

Global Dynamic Lighting combines with another Six Days innovation—Procedural Architecture. As we announced earlier this year, Six Days in Fallujah re-shapes the architecture inside and outside of buildings each time you play. With ever-changing lighting, and buildings that change shape every time you play, you can never predict what’s about to happen. Even if the same map is replayed over and over, you’re always going in blind—just like actual combat.


Developer Comment wrote:Let’s examine a case using Team Fortress 2's popular map, Badwater Basin. If you’ve never played TF2, you still probably recognize the map. If you were a regular, you likely played it with your eyes closed. A community member modded the map, leaving players very disoriented afterwards. Most were convinced the actual geometry of the map had changed, when in actuality, the modder simply rotated the angle of the sun by 180 degrees. Areas that used to be in shadow were now fully lit. Subconsciously, players were using lighting as a means for map memorization. There was little strategy involved—simply choose the light path versus the dark one after leaving spawn.

Global Dynamic Lighting peaks with outdoor environments in direct sunlight. With an open canvas during middle parts of the day, the scene isn’t overly complicated and approximating sunlight becomes less challenging. To achieve exterior authenticity, we found the exact position of sun during the first day of Operation Phantom Fury. Plotting this data to a curve with accurate height and angles, we mapped the complete arc of the sun for this entire period. With this, we possess the ability to dramatically change gameplay scenes by simply changing the angle of the sun. All on a realistic trajectory.

However, interior lighting poses more of a challenge. While other titles can completely separate interior and exterior levels, Six Days doesn’t have this luxury because players move seamlessly between houses. Marines were constantly moving between bright, wide-open outdoor spaces and dark, claustrophobic interior rooms throughout this battle. So, our interiors needed the lighting contrast and visual fidelity traditionally offered with baked lighting. But, just like our outdoor lighting, Procedural Architecture means our indoor lighting also had to be dynamic because the walls, furniture, windows, and other indoor components can change every time you play. So, we had to create our own unique dynamic lighting system.

With this Global Dynamic Lighting system, we have more creative control over Six Days. As shown in the video below, the transition from interiors to exteriors can be blinding and create various degrees of stress when being fired upon. This lack of visibility requires you to devise new tactics before entering many buildings. On the other side, moving from a bright afternoon into a dark basement can drive feelings of claustrophobia. On both accounts, the player walks into each scenario feeling unsettling emotions—uncertainty, hesitation, and fear.

Lighting, or lack thereof, is as much of a threat as enemy insurgents. You’re fighting the darkness as well as the boogieman, one just as relentless as the other. While the enemy is clearly discernible in other shooters, dark-clothed insurgents lurking in the shadows are entirely different entities. At its core, it’s a different fight with different strategies the player may employ. In one case, you may see muzzle flash firing from a doorway in the distance. In another, swinging ceiling lights may indicate enemy movement. Do you shoot blindly, expunging crucial ammo, toggle your flashlight for more clarity at the cost of your position, or simply hold and wait?

With Global Dynamic Lighting, time of day is no longer a development obstacle, as we are also featuring night operations in the game. Lighting plays a significant role here, with flares being deployed to light the area of operations. We have the ability to move these flares as needed as they fall, without any inconsistencies in world shadows. As you know, flares are not a consistent source of light, and the player returns to a dark night in Fallujah as the flares taper off. What’s more, enemy AI is tuned to better notice players when visible in light or when holding flashlights.

Working alongside Procedural Architecture, Global Dynamic Lighting is fundamental to giving our players a unique experience each and every time. Until recently, it was believed that Global Dynamic Lighting in high-end 3D shooters was only possible on the most recently released game consoles and high-end PC graphics cards. However, we are bringing this extraordinary technology to previous generation consoles and mid-range PC graphics cards, as well as the newest, next-generation systems, when Six Days ships in Q4-2022.
Top

I've been waiting for realistic flare lighting in games since Platoon in the 80's!
Top
Post Reply
2 posts • Page 1 of 1