I'm not sure if night combat has been confirmed for six days but seeing as how they have a video of flare being shot up illuminating the city for one thier sitreps,I think it's safe we will have night combat in six days which begs a few questions I'll be talking about in this thread and a few suggestions starting off with with NVGs and night optics.
I'm not gonna spend too much time one the NVGs since the folks over at Vitcura and highware have probably already know what I'm talking about due to thier reaserch, but just in case the marines were using pvs 14s and pvs 7s although this this bring some questions like how limted will your vision be seeing as how they would only cover one eye and were much earlier versions of future NVGs.
Next up are the night optics used throughout not just fallujah but iraq as well seeing as how I could only find one sight the AGM wolverine.I was going to post an attachment of it being mounted on the SAW However unfortunately I couldn't for whatever reason but I am typing this on my phone so that might explain it but regardless it did appear to see use during the second battle of fallujah however from some of the images I've seen night optics didn't appear to see much use instead marines relied on thier flashlights flares and NVGs to attack during the night.
Overall it will be interesting to see how night combat will play out in six days since from the clips I've seen it proved to be as intense as combat in daylight and if you've read house to house you or watched only the dead can see how sergeant David Bellvias night combat experience was nothing short of horrifying but that deserves his whole spreate thread lol anyways that's about I have full faith the devs will deliver on this.
Top

Our SAW gunners and SMAW gunners were issued AN/PVS-17 and pretty much all the SMAW gunners mounted the 17’s on their M16A4’s. Also most removed the tactical eye relief cone on the back because with this removed there was a better sight picture and eye relief.

The 14’s were a lot better than the 7’s mainly because it’s better to just cover one eye with one tube (14’s) instead of covering two eyes with one tube (7’s) but also better overall as well. Outside we would use our 14’s and PEQ-2 laser but could also turn on the IR flashlight and laser this might help illuminate a window. Inside we would need the PEQ-2 laser and IR flashlight on or we couldn’t see anything. The 14’s and 7’s also had a IR flashlight switch but these but could only help see maybe a few feet ahead so we needed to use the PEQ-2 flashlight.

How well a unit was equipped with night vision and ACOG’s seems to vary by battalion some were poorly equipped, my battalion 2/1 were very well equipped for the most part but other units have said they didn’t have that many night vision or ACOG’s.
Top

Nice to see another veteran comment on my post,thanks for the correction since I didn't know the name of it and I didn't have much to go off of besides "night optic",I had seen images of the pvs 17 being mounted on guns but never knew what they were called so thanks for that.And yeah some battalions were better equipped than others is pretty well known for anyone that's familiar with the marine Corp during the iraq war,some were better equipped for the night some weren't and that also goes for equipment in general since if you've watched generation kil or read the Novel you can see just how disorganized the whole Corp seemed to be and I imagine it was pretty similar to your experience in iraq.
Top


Unknown0351 wrote: ↑Mon Sep 19, 2022 1:02 pm How well a unit was equipped with night vision and ACOG’s seems to vary by battalion some were poorly equipped, my battalion 2/1 were very well equipped for the most part but other units have said they didn’t have that many night vision or ACOG’s.

We've found this to be true as well. Thanks for adding your experience and sharing with the rest of the community, too.
Top

If I can add some suggestions here, a lot of games seem to get NVG's wrong. Probably the best NV experience I've had so far has been on S.T.A.L.K.E.R G.A.M.M.A., which is a mod pack for Stalker Anomaly, which is a mod of the old stalker games. At any rate, here's a good video of a milsim gamer on what makes good NVG's in games and what ruins the immersion:

Also here's a picture from the "Gen 1" NV's in the Stalker GAMMA series: 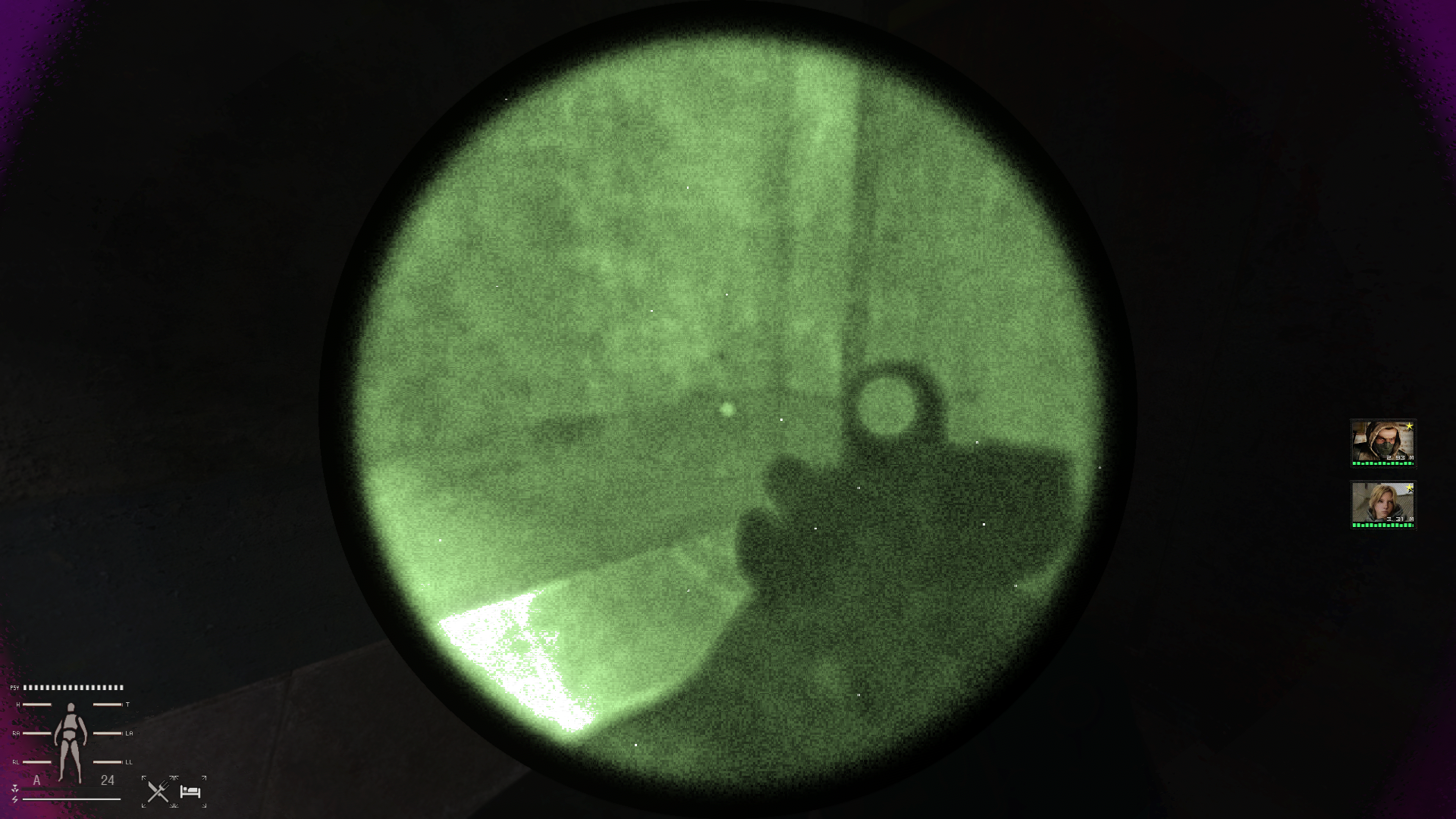 Specifically I'd like to point out that you can see regular colors around the outside of the NVG's and it doesn't just cover the whole screen. I don't have much experience with older PVS 7's or 14's, but I often do find night vision feeling less than realistic in a lot of modern shooters. I realize they unfortunately didn't have modern Gen 3 tech in Fallujah but hopefully you guys can test out some of that stuff or find some good reference material for it. Maybe something to consider.

I saw a thread discussing NVGs that pointed out how if they wanted to strive for realism, they should have the NVGs suck and I'm curious to hear what others think about this since I feel like it would make night operations that much more difficult and immersive, but It could very well turn annoying if not handled properly.
Top

I think that the NVGs portrayed don't necessarily need to be bad to the point they are unpractical like the monotubes did in Fallujah, I think that they atleast need to convey a level of "suckiness" for lack of a better word.

Take Splinter Cell 1 and Pandora Tomorrow on Xbox, in those games there is a depth of field that the PC version didn't have, you essentially couldn't see far away because of that particular effect.

Obviously this can be done differently in 6 Days. Also unlike Splinter Cell, most lights will be out of commission so during night ops you probably won't switch them back on and off.
Top

Hopefully this'll serve as a good reference for the team, as you can the night vision seen in the video has a sort of grain to it, I'm not exactly familiar with certain variants of NVGs, but I'm pretty sure the ones that were mainly used were the PVS- 17 and PV-7s, the PVS-17 only covers one eye so making it harder to see, and I feel like the "suckiness" should probably end with the a little bit of grain and loosing sight of one eye.
Top

BadKarma wrote: ↑Tue Dec 06, 2022 11:28 pm I think that the NVGs portrayed don't necessarily need to be bad to the point they are unpractical like the monotubes did in Fallujah, I think that they atleast need to convey a level of "suckiness" for lack of a better word.

SDiF is (from what I gather) a shooter with a focus on CQC / CQB and authenticity. However, folks have to remember that at the end of the day this is a game we're talking about and while I get there is a story to tell with authenticity being key, the mechanics can't be so annoying as to make the game (or portions of it) exasperating to play.

My take on it? Like some of the other suggestions, I feel not every aspect needs to be ultra-realistic nor does the game need to represent every possible scenario, etc. Ultimately what I'm looking for is an authentic feeling military shooter that my friends and I can play together for months or perhaps even years to come. That's why (frankly), I'm more interested in the co-op aspect of the game and features like the procedurally generated buildings, etc.

With regard to representing the NVG technology of the time, yeah, I think it would be fine to show just how primitive some of this tech was at the time and to convey that to the player to show some of the challenges soldiers faced in that regard. .....but it shouldn't be to the point of feeling maddening. What fun is that in a game?

If authenticity in this case is first and foremost, maybe a mission in the campaign that touches on this. ......as long as the game isn't designed in a way to force the player to rely on it frequently or even more than a few scenarios. Other options also would be good or just come to a compromise that favors gameplay with the loss of some of these realistic aspects. I'd be ok with that and feel you can still convey a sense of authenticity and immersion.
Top

I don't think anybody wants to be on verge of breaking something while playing a video game so...yeah I think it's best they keep it in a way that's not too frustrating for the player.
Top
Post Reply
12 posts